Email: This email address is being protected from spambots. You need JavaScript enabled to view it.

Email: This email address is being protected from spambots. You need JavaScript enabled to view it.

Who is J.J. Williams?

J.J. Williams was a member of the great Welsh Rugby team of the seventies. He played thirty consecutive games for 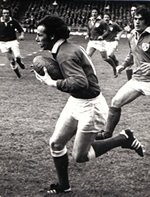 Wales and scored twelve tries in Five Nations Rugby playing on the wing; he won four consecutive Triple Crowns and two Grand Slams. He also toured with the British Lions in 1974 to South Africa and 1977 to New Zealand. It was on the unbeaten tour of South Africa that he scored four tries in the test series, becoming the only player to achieve that feat. He also scored six tries in one provincial match, which equaled the Lions Record. On the tour of New Zealand he scored the winning try in the second Test Victory to equal the series. He is the second highest try scorer in the history of British Lions rugby.

After playing for the Welsh Schools team at Outside Half, he started his club career at Bridgend R.F.C before moving to Llanelli in 1972. In his first season at Stradey Park, he played in the famous victory over the touring New Zealand All Blacks. Throughout his club career at Bridgend and Llanelli, he managed to win four Cup Finals, three Championships, two Snelling Sevens and two Floodlight Alliance trophies. He also played ten games for the Barbarians and two games for Natal in South Africa.

He was a dual sports International, where after winning the British Schools 100m and 200m titles, he concentrated on his athletics and went on to represent Wales at the 1970 Commonwealth Games in Edinburgh. In the same year he also represented Great Britain at the World Student Games in Turin. He was the Welsh Sprint Champion for a number of years but eventually decided to concentrate on his first love, which was of course rugby.